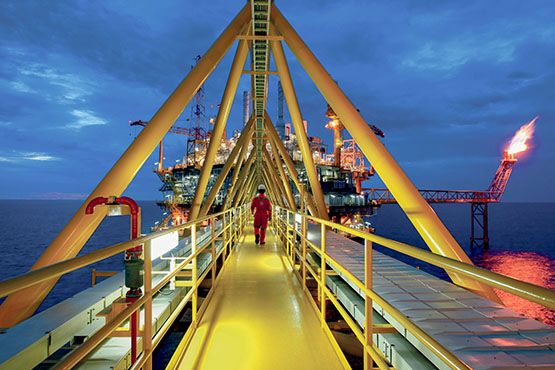 Bangkok, April 28, 2021 – PTTEP announced improved net profit of USD 376 million for the first quarter of 2021. The favorable growth was primarily attributed to higher selling price following the rise in global crude oil prices and the recognition of an extraordinary income from the investment in Oman Block 61 Project. The company has again revised up 2021 targeted sales volume after it could bring forward the completion of acquisition in Oman Block 61 and the first gas from Malaysia Block H Project to this quarter.

Besides, the average sales volume of this quarter was at 382,877 barrels of oil equivalent per day (BOED), slightly increased from 381,285 BOED in the previous quarter.

Total expenses in the first quarter were at USD 1,213 million (equivalent to THB 36,764 million), remained unchanged from the previous quarter. Although PTTEP recorded lower operating expenditure and general & administrative expenses in this quarter, the company has realized losses from non-recurring items including the assets write-off for an exploration project in Brazil of USD 145 million and oil price hedging loss of USD 107 million.

“We’d seen gradual improvement in our first quarter’s performance due to continued recovery of global oil price and several significant achievements. The completion of acquisition in Oman Block 61 and the first gas from Malaysia Block H Project have been accomplished faster than expected. These immediately added to the company’s sales volume in the first quarter as well as this year’s average petroleum sales volume, upward revision to 405,000 BOED. Regarding the exploration activities, we confirmed the successful petroleum discoveries from Dokong-1 exploration well in Block SK417 and Sirung-1 exploration well in Block SK405B, off the coast of Sarawak, Malaysia. Meanwhile, PTTEP has continued its plan to explore more prospects to enhance contingent resources.

Following a major gas discovery from Lang Lebah field in the Sarawak SK 410B last year, we completed the appraisal well early this year and the result registered a new record as PTTEP’s largest gas discovery. These achievements not only added reserves for our future growth but it also strengthened our investment base in the long term.” Mr. Phongsthorn stated.


The information, statements, forecasts and projections contained herein reflect the Company’s current views with respect to future events and financial performance.   These views are based on assumptions subject to various risks.   No assurance is given that these future events will occur, or that the Company’s future assumptions are correct.   Actual results may differ materially from those projected.