Khung Bang Kachao is in Phra Pradaeng district, Samut Prakan, just 20 kilometres from the delta where the Chao Phraya meets the Gulf of Thailand. It is influenced by high and low tides and salinity levels due to its proximity to the sea. The area has a unique character and a great diversity of flora and fauna.

This 11,000-rai green area was lauded by Time magazine in 2006 as "The Best Urban Oasis of Asia" — the key word is "oasis", the "lungs" that produce oxygen for the city of seven million people for nine months in a year thanks to seasonal winds. In the face of global warming and its worldwide impact, the area helps trap over 6,000 tons of carbon dioxide per year, according to a 2011 Study by Thailand Greenhouse Gas Management Organisation (Public Organisation) and Kasetsart University's Faculty of Forestry.

But our natural lungs have deteriorated due to the torrents of change pressing in around them.

Between 1982 and 1987, His Majesty King Bhumibol Adulyadej often rode in a helicopter over Bang Kachao. His Majesty remarked that the spot should be preserved as a green area and the lungs of the city.

The Environmental Impact Evaluation Bureau, under the Ministry of Science, Technology and Environment, purchased 564 plots of abandoned farmland covering an area of 1,276 rai. In 2003, 148 rai were turned into a public and botanical park. His Majesty gave it the name "Sri Nakhon Khuean Khan Park", after the ancient name of the place. It has been under the continual supervision of the Office of Royal Projects, Department of Forestry.

In 2008, Her Royal Highness Princess Maha Charki Sirindhorn visited Khung Bang Kachao and said: "Let's preserve this green area. Do not build anything beyond the limits of the law. Promote integrated farming and forests. Every party should take part in the renovation of Sri Nakorn Khuean Khan Park to ensure the necessary benefit for tourism and create a natural classroom for young people". 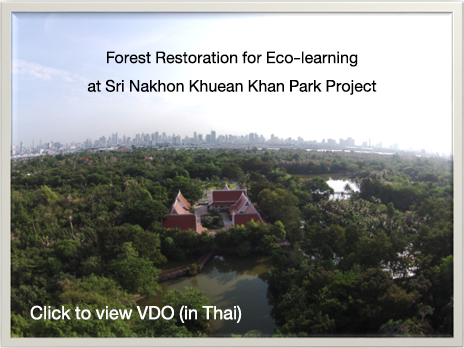 In 2013 PTTEP, with its commitment to environmental preservation through socially responsible projects, began working with the Chaipattana Foundation, the Office of Royal Projects, the Department of Forestry, Kasetsart University's Faculty of Forestry and other related agencies, and launched the "Forest Restoration for Eco-Learning at Sri Nakhon Khuean Khan Park Project" for eight years (2013-2020).

The improvement of the walking paths and nature signs took one year to complete. But the ecological restoration of Bang Kachao forest is an ongoing mission that will run until 2020. In addition, PTTEP continuously organizes the training for students in the area to build up the network of "Sri Nakhon Khuean Khan Park Youth Guide" and to raise awareness of the value of the Park. To date, 362 students have been trained to be youth guides for the Park.

The mouth of the canal, with an influx of brackish water coming in from the sea during high tide, enriches the expanse of mangrove forests, one of the three ecological systems that characterize this green pig's stomach. Meanwhile in the low-lying plains deeper inland, was once a freshwater swamp forest where rainwater was trapped during the monsoon season and dried up in summer, has been turned into fruit orchards and irrigation canals. Lastly in the high plains in the middle of Bang Kachao which was once a rainforest has been converted into farmland and residential areas.

After studying the terrain, the water channels and the plants, the 40-rai plot is divided into three restoration areas. The project requires planting new species in the existing areas, monitoring their natural growth until they fit into the structure of biodiversity and finding an equilibrium within one another.

Besides collecting data on the growth of plants, the project also collects data on carbon sequestration and degradation of leaves, since it is the first step in the cycle that improves the quality of soil and allows small creatures such as earthworms to become part of the food chain and improves the biodiversity.

At least 101 species of native wildlife have been identified. Birds in the area are both native species and migratory birds. Sri Nakhon Khuean Kan Park is an important location for bird watching.

The bike trail around the park is good for light exercise and educational purposes. The path serves not only able-bodied persons. Disabled and elderly visitors on wheelchairs can also enjoy a new, 500-meter nature trail with over 10 highlights along the way, such as copper pod trees, banyan trees, caryta mitis trees and a shaded rest area by the pond. Because of the pleasant landscape near the body of water, the spot is popular among wheelchair-bound visitors as well as families with children.

These trails were supported by PTTEP, under the Forest Restoration for Eco-learning at Suan Sri Nakhon Khuean Khan Park Project including landscape renovation of the botanical park that covers an area of 100 rai at the front and another 40 rai of reforestation

Just across the Chao Phraya River from Bangkok to Bang Kachao, visitors can feel the freshness in their lungs.
But how long will it remain like this?

At least Nakhon Khuean Khan Park has restored the three types of forest in Bang Kachao that will maintain the rich diversity of flora and fauna.

This is the hope amid the onslaught of change that is coming to “Nakhon Khuean Khan”.

Forest Restoration for Eco-learning at Sri  Nakhon Khuean Khan Park Project (Bang Kachao)
PTTEP is committed to reducing the environmental impacts through various projects. An example of commitment is the Forest Reforestation for Eco-learning at Sri Nakhon Khuean Khan Park Project (in line with HRH Princess Maha Sirindhorn's initiative; Bang Kachao) in Samut Prakan Province. The project was initiated in 2013 to restore a 40-rai forest in botanical garden and to renovate the park into an eco-learning site in the style of natural classroom. The site has become a popular recreational ground, nicknamed "the Lung of Bangkok". In addition, PTTEP continues to organize "Youth Guide Training", a training course for students in the area to build up network and raise awareness of the value of "Bang Kachao, Forest in the City". So far, 362 students have been trained under this program. Each year more than 300,000 visitors visit Sri Nakhon Khuean Khan Park.
PTTEP has carried out analysis on Social Return on Investment (SROI) of this project by measuring the social impact of the program with the financial quantification calculation (monetization). This method is intended to measure the value of the financial impact of the program that compares to the value of the impact to the cost of the program that has been invested into. It appears that the value of the SROI ratio is 1: 1. 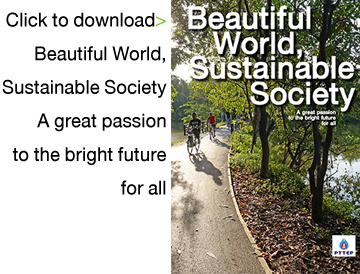